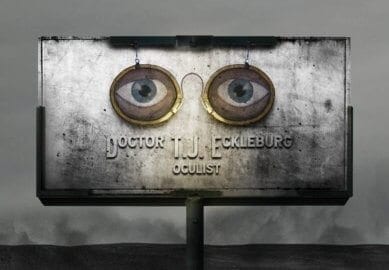 The eyes of Doctor T. J. Eckleburg are blue and gigantic—their retinas are one yard high. They look out of no face, but, instead, from a pair of enormous yellow spectacles which pass over a non-existent nose. Evidently some wild wag of an oculist set them there to fatten his practice in the borough of Queens, and then sank down himself into eternal blindness, or forgot them and moved away. But his eyes, dimmed a little by many paintless days, under sun and rain, brood on over the solemn dumping ground.1

The faded eyes of Doctor T. J. Eckleburg, looming over the impoverished “valley of ashes” dividing West Egg from New York City, haunt F. Scott Fitzgerald’s The Great Gatsby (1925). We first encounter the doctor’s eerie, disembodied gaze in the novel’s second chapter, when Tom Buchanan takes the narrator to meet his mistress. Of the doctor’s imposing billboard, Fitzgerald writes: The valley of ashes, this “solemn dumping ground,” is an industrial hellscape—a dusty, dismal land of lost dreams and forgotten people. Ever vigilant, Doctor T. J. Eckleburg bears witness to the valley’s abjection, to those sacrificed to early-twentieth-century American material culture, and to Tom’s extramarital affair. More than merely observing this seeming dissolution of American values, however, the godly doctor sits in judgment of capitalist greed and infidelity as a symbol of the nation’s faded morals. Near the end of the novel, following the car crash that leaves Tom’s mistress dead, her widowed husband looks to the eyes of Doctor T. J. Eckleburg and prays—as though to God—for strength, salvation, guidance, and resolution, intoning “God knows what you’ve been doing, everything you’ve been doing. … God sees everything.”2

Reading Doctor T. J. Eckleburg as a symbol of American morality or as a stand-in for God demands a closer attention to the oculist’s professional perspective, however. The shifts in American societal norms accompanying the nation’s industrialization, urbanization, and rapid spike in immigration—of which Doctor T. J. Eckleburg sits in judgment—were accompanied by the professionalization of American medical practice, the development of new diagnostic technologies, and the rise of public health throughout the late-nineteenth and early-twentieth centuries, as well. Subsequently, the striking image of the physician’s fading billboard also symbolizes the growing prestige of the medical profession at the time of the novel’s publication. Were “Mister” T. J. Eckleburg a machinist or perhaps a store clerk, it is hard to believe he could so profoundly present an image of moral authority, but the physician occupied a privileged place in early-twentieth-century American society. That Doctor T. J. Eckleburg could be mistaken for God by virtue of his omniscient gaze suggests, first, that the physician possesses the power to see in way others cannot, and second, that the doctor’s heightened perceptiveness is both attuned to and representative of American values and ideals.

The American physician was not always held in such high esteem, however. Before the 1870s, medical training and practice was largely unregulated. In many states, physicians were not required to complete medical school, pass a qualifying examination, or even obtain a license in order to practice medicine, but by the early-twentieth century standards for medical education and licensure were much more strictly regulated.3 Accordingly, these more rigorously trained and more comprehensively certified physicians demanded a greater respect from their patients.The birth of bacteriology and the development of scientific medicine, in conjunction with the standardization of medical practice, contributed to the growing prestige of physicians in the late-nineteenth century. Specialized knowledge of bacterial infection and transmission authenticated the physician’s professional opinion while subjugating the non-scientific methods of homeopathic practitioners and the patient’s own lay knowledge or experience of their illness. As medical technologies improved, especially diagnostic technologies such as the microscope and the X-ray, it became possible for physicians to see things that the average American could not—most importantly, the microscopic germs discovered to be the cause of common diseases including tuberculosis, cholera, diphtheria, dysentery, and tetanus.4 As a result, Americans became more dependent on the authority of medical professionals.5 Historian of medicine Paul Starr explains, “the less one could believe ‘one’s own eyes’—and the new world of science continually prompted that feeling—the more receptive one became to seeing the world through the eyes of those who claimed specialized, technical knowledge, validated by communities of their peers.”6 It is only the laboratory-trained physician who can see microscopic agents of infection and, thus, to accurately diagnose disease, and it is only the practitioner of scientific medicine, therefore, who is privy to the unseen forces of cause and effect.

The recurrence of the eyes of Doctor T. J. Eckleburg throughout The Great Gatsby—they are referenced in many of the novel’s most significant scenes, including the death of Tom’s mistress and Tom’s allegation that Gatsby’s gaudy yellow car was responsible for her death—encourages readers to see these events as the doctor sees them, with the scientific objectivity and the “specialized, technical knowledge” of the laboratory-trained physician. The eyes of Doctor T. J. Eckleburg see the world of Fitzgerald’s West Egg and the valley of ashes more clearly and more completely than those of the arrogant, aristocratic Tom Buchanan or the unscrupulously ambitious Jay Gatsby. Tom is aware of the privileges his inherited wealth bestows, yet blind—or at least indifferent—to the consequences such selfishness incurs. Nevertheless, Doctor T. J. Eckleburg watches over Tom’s lover’s desperate infatuation and her husband’s quiet despair. Gatsby does not—or refuses to—see that his ostentatious displays of affluence can never hide his humble origins, that no matter how much money he has he will never be Tom’s social equal. Yet Doctor T. J. Eckleburg witnesses the car crash that links Gatsby to Tom’s mistress’s death, whereby Gatsby’s newly-won wealth makes him conspicuous without affording the same social allowances Tom’s aristocratic birth confers. The doctor thus sees through the politics of social class and the false promise of the American dream that the characters themselves cannot, his medical authority affording his diagnostic gaze a moral authority in the novel.

Literary critics have often interpreted the eyes of Doctor T. J. Eckleburg as a symbol of moral authority because “the scenes that take place at the valley of ashes,” under the doctor’s watchful gaze, “collectively unite Fitzgerald’s major themes of hope, illusion, mortality, corruption, materialism, success, and failure.”7 Yet by placing this moral authority within a larger historical context that includes the professionalization of medical practice, we gain a greater understanding of the role of the physician in the novel and in early-twentieth-century American society as one who, with God-like omniscience, “sees everything.” It is only because Doctor T. J. Eckleburg is a physician that we can trust the world as seen through his eyes and the moral diagnosis his brooding billboard symbolizes.

RACHEL CONRAD BRACKEN is currently pursuing a PhD in American literature at Rice University. Her research focuses on the intersections between nineteenth- and twentieth-century American literature and histories of public health, medical practice, infectious disease, theories of contagion, and diagnostic technologies.