New York remains exciting, vast, wonderfully alive. On Fifth Avenue, elegant ladies promenade in the sun, ride in horse carriages, spend their money at Gucci’s and Tiffany’s, or cast wistful eyes at the window where Empress Josephine’s tiara and the emerald-studded crown of the Romanovs are exhibited behind unbreakable glass. Further on, at La Vieille Russie, rich imperial paintings and golden icons momentarily deceive one into thinking that the czarina is still going strong in St. Petersburg. In St. Patrick’s Cathedral smart young couples swear eternal vows to the splendid sound of a magnificent organ; crowds enjoy their leisure in Central Park, buying pretzels and Italian ice, and feeding gorillas that should not be fed; strains of the “Merry Widow” still reverberate amid the marble columns of the palm court at the Plaza Hotel; and for dinner there are restaurants, Argentinian, French, Japanese, Indian, Arabian, Jewish, and vegetarian, not to mention the inimitable Russian tea room, another monument to the fallen Romanovs. Downtown, in the Village and beyond, exciting experimental theatre companies revive the immortal plays of Euripides and Sophocles; decaying warehouses change overnight into lovely art galleries; crowds of tourists in Chinatown spend their money on grotesque mandarin statues and delicious mandarin food; and in Little Italy the young people sit in curbside restaurants sipping cappuccino and eating cannoli, deliberating whether to go to college in North Carolina or spend the summer hitchhiking in Europe.
For as little as two dollars those too long in medicine pent may ride to 14th Street and Broadway, to the old-fashioned second-hand bookstores that, like other disappearing species, should be marked for preservation and protected by benevolent societies; and for another ten dollars may walk away with armfuls of hardcover books—Henry James, De Madariaga, Hardy, Pascal, Hemingway, Villehardouin’s Crusades, Madame de Sévigné, and Mandeville, who was not Sir John at all but a French missionary and a German Knight and an Armenian nobleman all in one. And then one may wander with all these newly found companions, stopping to watch the 8-year-olds in black uniforms play coeducational soccer on the grounds of the Catholic school (the girls play just as rough as the boys), or pausing to read about the Emperor Prester John, who had no banners borne before him when he went into battle against any other lord, but three crosses set in chariots fully arrayed; whose palace in Susa is so rich and so noble that no man can imagine it but he that has seen it; and who has also born before him a platter of gold full of earth in token that his noblesse and his might and his flesh shall also turn to earth.1 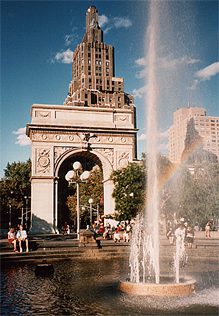 From Broadway it is only a stone’s throw to Washington Square, with its Arc de Triomphe and its statue of Garibaldi, with the students sitting in the park and playing the guitar or merely enjoying the sun. It must have been on just such a sunny day in July 1676 that the crowds gathered in Paris in front of Notre Dame to watch the execution of the young marquise accused of poisoning her father and her brother. She had confessed everything, noted Madame de Sévigné, but they applied the torture just in case, before letting her do penance to Notre Dame with a rope around her neck, and then burning her poor headless body on the stake and scattering her ashes into the air.2 Too late to repent, too late also for the very Catholic Queen of Castille, who fell for Christopher’s disastrous plan while Henry VII wisely said no to his brother Bartholomew; for had it been otherwise, muses De Madariaga, the United States would still be where they are, but the Mediterranean would have become a veritable Spanish mare nostrum, with Mexico being in Morocco, Columbia in Algeria, Peru in Tunisia, Chile in Egypt, and Argentina in Asia Minor.3
But leisure is the order of the day, for if action is the music of our life then leisure is the pause, the silence between the movements of a symphony. And man needs leisure, writes Salvador de Madariaga, to contemplate, to be passive, to breathe in just as he breathes out, for only the freedom of his leisure makes man truly free.3 And what can be freer than to wander with books through Washington Square, to eat cannoli and sip cappuccino, to think thoughts that have nothing to do with the immanence of everyday life.

GEORGE DUNEA MD, FACP, FRCP, FASN is the President and CEO of the Hektoen Institute of Medicine. He is also a Professor of Medicine at University of Illinois at Chicago and the Medical Director of Chicago Dialysis Center and Founding Chairman Emeritus, Division of Nephrology, Stroger Hospital of Cook County.