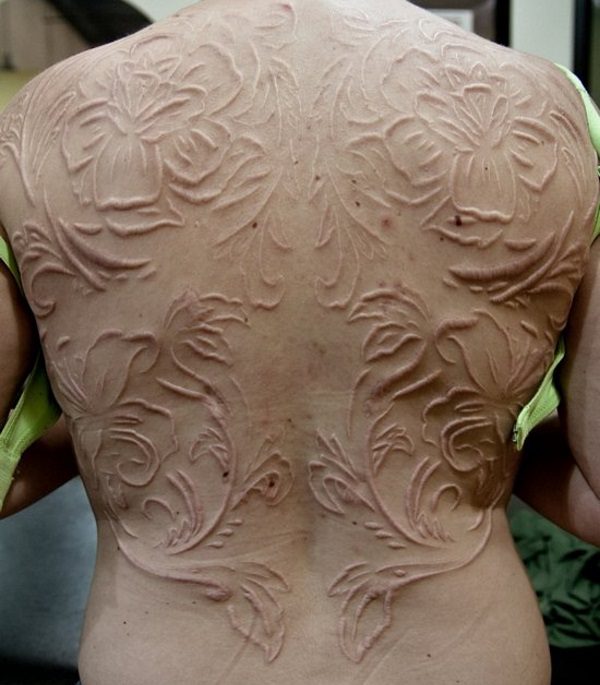 Scarification is the act of “covering, disguising and transforming the body”1 by creating wounds in one’s own flesh in order to cause indelible markings. It is perhaps one of the most misunderstood body modification procedures done today, largely perceived in Western society as a tabooed and harmful cultural practice.2 Superficially it would seem to be a counter-intuitive self-defeating act, for why would anyone want to deliberately maim oneself or expose oneself to something so painful and risky? Yet despite this paradox, scarification is widely practiced in some manner in almost every society and has held a strong cultural significance in many civilizations. It has been viewed as developing the virtues of self-sacrifice and bravery, providing people with an outlet for self-expression and a stronger sense of identity as well as “a sense of continuity in a rapidly changing world.”3

The act of scarification itself is painful regardless of how it is done. One common method is to cut the skin with a sharp object in whatever pattern is desired.4 To accentuate the scars “after the incisions are made, soot, used as a sterile irritant, is often rubbed into the open wounds and the flesh pressed out, so that all the cuts are raised above the level of the surface, making the scarring even more prominent.”5 This method of accentuating the scars is known as “packing.”6 Often “a hooked thorn”7 or fishhook is used to help raise the skin as much as possible and make the scars even more pronounced. A common alternative method is cauterization8 or “branding, in which a heated metal stencil is used to burn the desired pattern into the skin.”9 This is said to be particularly painful, as it causes all of the skin affected to peel before healing to form a prominent scar.

As a cultural practice, scarification draws its roots from a tribal primitivism that has existed for centuries in many civilizations. Perhaps the most obvious examples of this are the scarification traditions of the tribes of Africa and the western Pacific.10 Using rock art dating, scarification tradition in African tribes can be traced back to beyond 4000 B.C.11 In these societies, scarification played an integral role in helping to classify individuals by age, life experiences, sexual maturity, and family and tribal groupings. Such traditional demarcations have been carried down through to the tribal societies of today, exemplified by the initiation rite for young men of the tribes of Papua New Guinea’s Sepik region, where “it is believed that crocodiles created humans. The initiate’s chest, back, and buttocks are sliced with a bamboo sliver to test his strength and self-discipline. The resulting scars represent the teeth marks that ‘swallowed’ the young man during the ceremony.”12

Many societies originally used scarification to identify their fellow tribesmen from the enemy: “The indelible markings prevented warriors, who wore little clothing, from killing members of their own tribe, and ensured corpses received the correct funeral rites.”13 When the slave trade began in Africa, scarification served to protect natives as their scars “helped to prevent the wearers being taken into slavery because traders viewed unscarred faces as a sign of good health.”14 This positive connotation of tribal scarring has persisted to this day in the country of Benin, where “people who don’t have traditional scars are still considered to be the descendants of slaves, immigrants, or refugees.”15

The significance of scarification extends to many other aspects of the tribesmen’s lives, spiritually, politically and sexually. The pain and personal sacrifice associated with scarring has been perceived by many tribes as a mark of one’s spiritual character and “a vehicle for purging emotional and physical issues [in] preparation for a spiritual life.”16 The pain and discipline needed to tolerate it was regarded by many as a sign of mental fortitude and spiritual maturation. It has also been seen in many tribes as a cathartic purging of bad spirits from the body and a medium for connecting to higher beings and transcending to a higher state of thought through the disciplined control of the pain: “Pain and suffering, whether voluntary or forced, are used in many traditions as a form of purging in order to prepare for a spiritual life whereby one lives with one foot in the tangible universe and the other resting firmly in that spiritual realm.”17 Scientifically speaking, this heightened sense of self can be explained by the rush of endorphins (essentially opiates) from the brain that occurs when one is placed in a high-stress or high-pain situation like defacing the skin, and the ensuing “period of calmness as the opiates are reabsorbed or metabolized.”18

Many tribes believe so much in this apparent spiritual connection through the act of scarification that they incorporate it into their religious rituals. In many societies, certain types of scars bear specific religious significance. For example, in the Jewish religion male foreskins are cut off eight days after birth to symbolize the covenant between that young man and God. In this and similar situations, scarification “constitutes a visible record of incarnate religious forces and a sacred chronicle of a culture’s life-crises ceremonies.”19 Certain religious scars are thought to imbue qualities on the wearer throughout life and even after life; family members who receive the same scars are said to be instilled with many of the same qualities of personal strength, and “in certain societies these marks are believed to be inscribed on the ghost or spirit after death, enabling the gods or spirits to recognize the membership and status of the deceased and to send him or her to an appropriate place of posthumous residence.”20 In these tribes, scarification plays an essential part in the quest for spiritual completion.

In tribal societies scarification also plays a role in gender identity and sexual expression. Aside from their social and political significance, the scars are considered to be beautiful elements of attraction, perceived to enhance physical appearance, and considered “erotic in their sensual connotations.”21 They are said to enhance one’s features and make one more appealing to the opposite sex, the etched markings indicating a sort of increased sexual viability through one’s willingness to tolerate hardship and pain, a striking robustness conducive to being a good mate and parent. In many tribal societies, “the more scars a person has, the braver they are considered to be; a woman with extensive scarification may be perceived as better able to deal with the pain of childbirth.”22 Conversely, those persons who bear no evidence of scarification are considered less appealing: “In many societies people without visible incisions are seen as anti-social and looked down on as cowards and outsiders.”23 Consequently, these “young adults who stay in their home region and don’t have the traditional scars often have difficulty finding a spouse.”24 In this way, the practice of scarification becomes ever more important to success within tribal societies, serving as an emblem of personal self-sacrifice and bravery.

By contrast, scarification in Western society is viewed as “self-harming, ‘mutilative,’ and self-objectifying,”25 perceived as “an outdated and cruel practice”26 “considered an actual or grievous bodily harm,”27 an “involuntary marking and denial of personhood”28 exemplified by the branding of concentration camp inmates during the Holocaust. Yet in Western culture scarification is often deeply meaningful to those who practice it as a means of freedom and escape from societal and cultural pressures.

In her book, In the Flesh, historian Victoria Pitts suggests that the negative stigma of scarification in Western society is to some degree undeserved, being for some a means of departing from accepted societal norms and demonstrating one’s individuality and refusal to conform. Pitts claims that “through the revival of non-Western, ‘primitive’ body rituals, body modifiers aim to demonstrate symbolic control over their bodies by experiencing and adorning them in ways prohibited by Western culture.”29 Thus one woman who had cut the incisions into herself explained it was about the “spirituality of claiming myself, accepting myself.”30 She believed that by making the cuts she was transitioning to a higher state of being, transcending normal human feeling, remaining calm through the pain of it, “similar state to that of Buddhists, when they spend hours and hours in the state of prayer. It is that place of acceptance and floating and honor.”31 Pitts described that many persons who resort to scarification have been victimized or emotionally traumatized by preying individuals or by society at large, and need to change and escape from their past. For those that partake, “ritualized marking symbolically revokes former claims on the body—those of victimization, patriarchy, and control—and so is deeply meaningful.”32 Pitts also claims that women do so out of a desire to counteract the (what they believe to be) unfair gender role expectations set by society as far as standards of beauty they must maintain: “Women body modifiers have argued that modifying the body promotes symbolic rebellion, resistance, and self-transformation, that marking and transforming the body can symbolically ‘reclaim’ the body from its victimization and objectification in patriarchal culture.”33 In that same vein, many people who undergo scarification see it as a means of freeing themselves from “the enormous economic, social, and political pressures surrounding one’s appearance.”34 Pitts defends the right of the body modifier to this form of self-expression, saying that body marking can ultimately be “a symbolic way of transforming oneself into a stronger, more self-reliant person.”35

One example of scarification in Western society is the advent of the Modern Primitivism Movement, begun in the 1990s, a subculture dedicated to living a simpler life through the more “primitive” forms of body modification such as self-mutilation and scarification. Modern Primitives attempt to use scarification much as some tribesmen, as a form of spiritual enhancement and a means of convening with a higher level of being through the pain associated with the practice.36 Modern Primitives “believe that pain is the key to connecting the real truth and the self in the modern world.”37

Yet scarification has its dangers: local wound infections, hepatitis B and C, HIV, and septicemia.38 Despite its many risks, however, it has been regarded by some having potential health benefits, aiding recovery from physical trauma and immunological stress, increasing resistance to stress, and a sign of viability. For many scarification is a means of connecting to society and its culture, an opportunity to mature through discipline and self-control, and an outlet for self-expression. It clearly is not just some primitive form of barbarism, but rather an unusual way for a person to interact with society. One could actually say that in scarification there is more than meets the eye!

KENNY FELSENSTEIN is the Molecular Target and Drug Discovery Fellow of the Genetics Section of the Laboratory of Cancer Biology & Genetics at the National Institutes of Health. His passion for the history of medicine began during his undergraduate career at Johns Hopkins University, where he finished with a joint degree in public health and the history of science, medicine, and technology. In particular, he is interested in the history and ethics of body modification, the history of genetics, and the history of public health practices in Western society, particularly as they pertain to the study and treatment of cancer.

Winter 2017 |  Sections  |  Africa
Manage Cookie Consent
To give our readers the best experience, we use technologies such as cookies to store and/or access unique information about your use of our site. By clicking "Accept", you consent to this processing of your personal data as explained in our Privacy Policy. You can revoke or customize your consent by clicking "Update preferences".
Manage options Manage services Manage vendors Read more about these purposes
Update preferences
{title} {title} {title}